Posted at 10:30h in News Archive by Alison Coleman

De Pleasure, ridden by Eliza Stoddart and owned by Mrs Susie Brankin Frisby and Mrs Heather Sandell, took the honours in the Burghley Young Event Horse four-year-old qualifier. The grey gelding by Diacontinus scored highly in each phase, finishing with a total of 92. 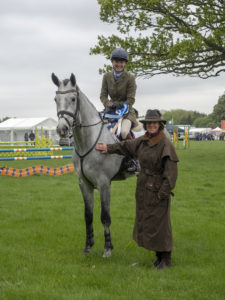 “We bought him from the Brightwells auction at the end of last year,” said Eliza. “We’re absolutely thrilled with him and how he’s turned out. He’s got the most wonderful temperament and is hopefully a real future talent for me.

“He has beautiful paces and he really showed himself off very calmly. He went to Chatsworth and finished in the top ten there and this is just his second show. I’m so pleased for his owners. It’s our local event, so we’re absolutely thrilled.”

Giovanni Ugolotti finished second with the lovely chestnut stallion, Headleys Deluxe. They also scored strongly throughout, finishing on a total of 86 and taking the second qualification spot. Third place went to Ginnie Turnbull and Rolex II, a bay gelding by Grand Slam.

The five-year-old qualifier was hotly contested, with Kelly Aldous and her own Winair BDA coming out on top. The BDA Equestrian homebred, qualified for the prestigious four-year-old final here at Rockingham last year and went on to finish sixth in the final at Burghley. 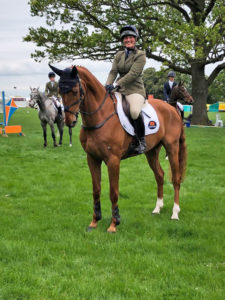 The pair lost just one mark in the dressage phase, scoring an impressive 29 out of 30. They followed this up with 35 in the jumping, 18 in the conformation and 6 in the final phase to finish on a score of 88. Winair BDA will begin his eventing career next month.

Second place went to Camilla Earnshaw and Trinity Match Me, who scored a full 10 marks for the ‘wow factor’ phase. The bay gelding, owned by Sally Earnshaw, finished on a total of 84.

Just one point behind Camilla, was John-Paul Sheffield and Serengeti who finished third. The bay mare by Supertramp, owned by Mrs Alison Walton, scored 28 in the dressage, 30 in the jumping and 10 for conformation on their way to a final score of 83.