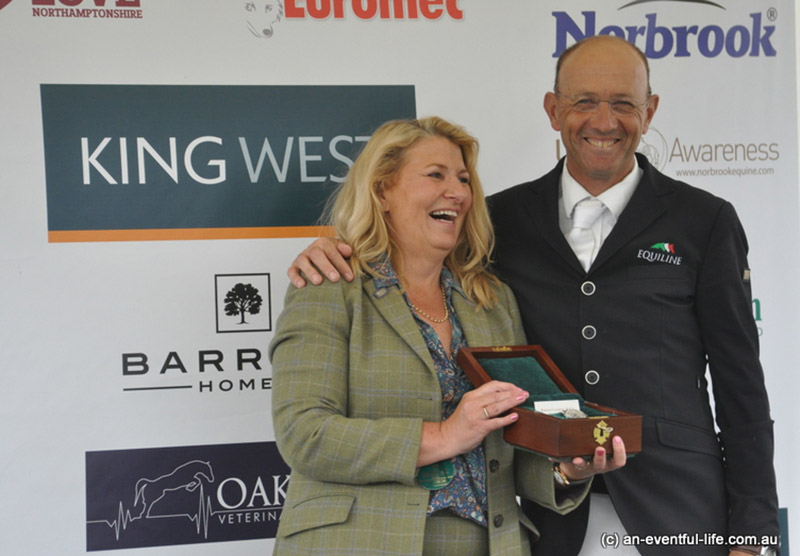 Posted at 18:31h in News Archive by Georgia Ryman

Bill Levett (AUS) is this year’s winner of the Loomes Championship, winning a £9,500 handmade English watch for finishing closest to the optimum time in either the open intermediate or advanced intermediate.

It could not have been closer. Bill finished fifth in the advanced intermediate, with a dressage score of 30.8, one rail down and a cross country clear bang on the 5:45 optimum time. However, Nicholas Lucey (GBR) – who finished fourth with 33.4 dressage score and a double clear, was also bang on the optimum time. However, the rules state that if two top five finishers have identical cross country scores, then the dressage collective marks come in to play – which gave Bill the advantage.

A visibly surprised Bill joked: “Yesterday both my kids were in the pony club classes and my wife was in the CIC1* – they all won rosettes, and took great pleasure in pointing out that I had none. This is definitely better than a rosette!”

Andrew Hoy (AUS) was the winner of the advanced intermediate, Cheeky Calimbo finishing on his 27.5 dressage score. “It was a last minute entry, more of a tack check after our blip at Belton,” Andrew admitted [Cheeky Calimbo’s saddle slipped back badly on the cross country, Andrew having to pull up]. “Fortunately this week everything worked.”

Ibby Macpherson (GBR) claimed Open Intermediate P on a Ballingowan Echo, and admitted that she is looking to establish The Picnic Partnership, a syndicate surrounding her five horses which range from BE100 to Three Star. Meanwhile Whitson made up for a blip at Badminton with Louise Harwood (GBR) and had a great confidence boosting run ahead of Luhmuhlen to win Open Intermediate O on a 23.9 dressage score.. Paul Sims (GBR) and Elisabeth Halliday-Sharp (USA) were the two runners up.